With thousands of books to choose from, it can be an overwhelming task to find books to help teach courage. Here’s a few book suggestions to start those conversations.

“I am very brave,” Sheila Rae said, patting herself on the back. She wasn’t afraid of anything—not thunder, not lightning, not the big black dog at the end of the block. And when she wanted to walk home a new way and Louise wouldn’t, she called her sister a scaredy-cat and set out alone. But all the bravado in the world failed to help when Sheila Rae found herself lost. Luckily, her sister was not far behind.
View on Amazon

The Wildest Brother by Cornelia Funke

Brave as a lion, strong as an elephant, Ben is a fearless young boy. When it comes to protecting his big sister, Anna, nothing can stand in his way! Gallantly he spends his day battling moldy green ghosts, slime-belching monsters, and all sorts of ferocious beasts. But when the day is over and darkness falls, Ben suddenly doesn’t feel quite so brave. Sometimes, he realizes, it’s the big sister who does the protecting.
View on Amazon     View on Scholastic 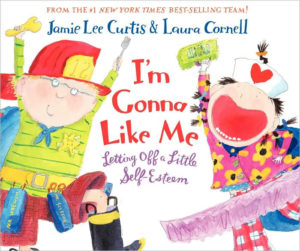 I’m Gonna Like Me: Letting Off a Little Self-Esteem by Jamie Lee Curtis

Celebrate liking yourself! Through alternating points of view, a girl’s and a boy’s, Jamie Lee Curtis’s triumphant text and Laura Cornell’s lively artwork show kids that the key to feeling good is liking yourself because you are you.

Henry’s Freedom Box: A True Story from the Underground Railroad by Ellen Levine

Henry Brown doesn’t know how old he is. Nobody keeps records of slaves’ birthdays. All the time he dreams about freedom, but that dream seems farther away than ever when he is torn from his family and put to work in a warehouse. Henry grows up and marries, but he is again devastated when his family is sold at the slave market. Then one day, as he lifts a crate at the warehouse, he knows exactly what he must do: He will mail himself to the North. After an arduous journey in the crate, Henry finally has a birthday — his first day of freedom.

The Story of Ruby Bridges by Robert Coles

The year is 1960, and six-year-old Ruby Bridges and her family have recently moved from Mississippi to New Orleans in search of a better life. When a judge orders Ruby to attend first grade at William Frantz Elementary, an all-white school, Ruby must face angry mobs of parents who refuse to send their children to school with her.

Stuart’s got problems. It’s raining. He’s bored. And worst of all, he’s new in town, so he’s got a lot to worry about. But what does a kid like Stuart need in order to have an adventure…and to stop worrying? A cape, of course! Sara Pennypacker’s story captures the daily dilemmas that every child must face. Her words are perfectly complimented by illustrator Martin Matje’s combination of weirdness and wit.

The Wanderer by Sharon Creech

Thirteen-year-old Sophie hears the sea calling, promising adventure and a chance for discovery as she sets sail for England with her three uncles and two cousins. Sophie’s cousin Cody isn’t sure he has the strength to prove himself to the crew and to his father. Through Sophie’s and Cody’s travel logs, we hear stories of the past and the daily challenges of surviving at sea as The Wanderer sails toward its destination—and its passengers search for their places in the world.

Number the Stars by Lois Lowry

As the German troops begin their campaign to “relocate” all the Jews of Denmark, Annemarie Johansen’s family takes in Annemarie’s best friend, Ellen Rosen, and conceals her as part of the family. Through the eyes of ten-year-old Annemarie, we watch as the Danish Resistance smuggles almost the entire Jewish population of Denmark, nearly seven thousand people, across the sea to Sweden. The heroism of an entire nation reminds us that there was pride and human decency in the world even during a time of terror and war.

Palmer LaRue is running out of birthdays. For as long as he can remember, he’s dreaded the day he turns ten — the day he’ll take his place beside all the other ten-year-old boys in town, the day he’ll be a wringer. But Palmer doesn’t want to be a wringer. It’s one of the first things he learned about himself and it’s one of the biggest things he has to hide. In Palmer’s town being a wringer is an honor, a tradition passed down from father to son. Palmer can’t stop himself from being a wringer just like he can’t stop himself from growing one year older, just like he can’t stand up to a whole town — right? Newbery Medal winner Jerry Spinelli’s most powerful novel yet is a gripping tale of how one boy learns how not to be afraid.